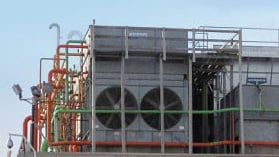 When our engineers step onto a roof and see cooling towers with multiple cells/fans they see energy $avings.

Experience tells us these systems often use a simple on-off control scheme for their fan motors – meaning when cooling is required, fans cycle on sequentially, each turning on at full speed, until enough cooling is achieved to maintain the setpoint temperature.  Obviously if outside air temperatures are rising the system has to work harder and more fan motors turn on.  As outside air temperatures fall or the setpoints are reached, fans do the opposite, cycling off one at a time until all fan motors are off.

With this control model, if it takes six fans to maintain a setpoint and the outside air temperature goes up, even by one degree, another motor kicks on at full speed – a bit of overkill. In an attempt to save energy in this situation some companies have installed VFDs so that the last motor will usually be running at slower than full speed.

The big miss here is that the VFD savings from just one motor running at a lower speed is inconsequential compared to running all the fans at lower speeds. This model leverages all the fan capacity as one system. The key insight uses the motor power vs energy consumption graph – it teaches us that running two fans at half speed consumes 75% less energy than running one fan at full speed.

But in which situations is it best to do this?  Industrial cooling towers often operate multiple shifts and run all year long. Fast return investments depend on these longer run hours, but also the customer’s cost of electricity and potential utility rebates in the customer’s region, be they prescriptive or custom.  Commercial cooling towers in Northern US states are drained in the winter and run fewer hours, but have high rebates and strong utility incentives.

Our team sized a $45,000 VFD system for an industrial cooling tower with two cells and two 50hp fan motors.  The fans were running 4,000 per year and the customer paid $0.12/kWh for electricity.  For this application National Grid provided a $13,500 incentive.  The addition of the VFD’s saved $15,700 per year in electricity costs.  So our customer saw what our engineers saw – energy $avings – and a two-year payback on their investment – pretty cool, right?