Will ISO 50001 Have The Same Success Rate As The Carbon Disclosure Project? 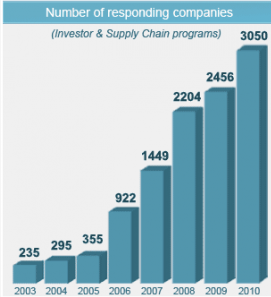 In last week’s Traditional Energy Audits Are So Yesterday we noted that the recently introduced ISO 50001 energy management standard may help companies establish their own energy management process. Where audits are a snapshot look at usage, ISO 50001 gives them a “Plan-Do-Check-Act” framework for energy usage in their business.

But as with any new standard, a lot of folks are trying to quickly figure out what it is, what it requires and what it means to them.

As a reference, it’s interesting to consider what happened in 2003, when the Carbon Disclosure Project issued its first request for climate reporting.  Social impact reporting was a newer concept then, but some early adopters latched on to CDP’s offer, with over 200+ organizations reporting that first year.  Within three years 900+ companies were responding, by 2008 2,200+, and today there are over 3,000 in over 60 countries.  Along the way CDP itself has been providing guidance and interpretations for these organizations, as have a broad range of environmental consulting companies.

With the economy still challenged and many companies now recognizing that focusing on energy use is sustainability that pays a financial return, maybe we’ll see similar hockey stick adoption for ISO 50001?

Perhaps as a strong leading indicator, several companies have already announced their adoption, with Schneider Electric noting that their world headquarters is the first building to earn ISO 50001 certification.

Also, if you’re trying to figure out the what it is, what it requires and what it means question, here is a useful white paper and even the DOE has a getting started website up now.

via Will ISO 50001 Have The Same Success Rate As The Carbon Disclosure Project? | Enterprise Smart Grid.