What’s the escalation rate on your PPA? 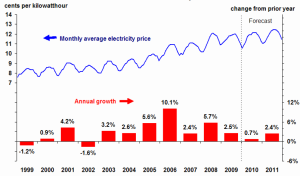 Recently a customer had us model the energy production and financial return for a new 2MW cogen system at their manufacturing site in the United Kingdom.

Our analysis considered their contract cost for kWh and natural gas, the system’s energy production in kWh and therms, its full installation and annual maintenance cost and their UK tax benefits, including a reduced carbon tax from the UK’s Carbon Reduction Commitment.  All in, the capital investment had a simple payback of 2.3 years.

When we built the system’s 10 year PPA model there was one big question – what escalation rate for kWh and gas should we use?

Pre-2008 solar PPA providers were actually able to convince some green minded tax-exempt customers to sign 20 year contracts with annual escalators as high as 5 %.  At the time they referenced a 7-10%  inflation rate for the cost of electricity during the preceding decade.  Today these contracts look pretty upside down.

Post-2008 the world’s slowdown has Groom Energy engineers now considering a declining cost of power in our multi-year models.  One recent PV analysis utilized our customer’s previously contracted electricity cost of $0.14 kWh in 2010, $0.13 in 2011 and $0.12 in 2012.  Unlike residential tiered pricing, corporates with predictable large usage have the capacity to buy these flat rate and now declining kWh contracts.  Our friends at World Energy can probably confirm that this is a trend, not an isolated event.

Pre-RGGI being replaced by a more toothless US Federal Climate Bill (which includes a limited carbon tax), the controversial Cape Wind project recently signed a 15 year PPA with National Grid which included a 3.5% annual escalator.

A corporate’s view on its future cost of energy has a dramatic effect on the lifetime value of any green investment.  So in a world where corporates need to make rational investment decisions today and balance them with a longer term view, what’s a “safe” escalation rate?

While there’s a solid fact based argument for both higher and lower rates, I bet for the time being we’ll see neither – 0% is the only safe choice.