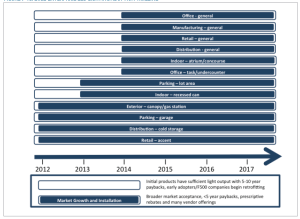 Tomorrow we’re announcing the publication of our research report Enterprise LED Lighting, distributed with our partners at GreentechMedia.

While Lightfair 2009 was a coming out party for LED’s, this year EVERY possible lighting application, from 2 watt dimmable candelabras to 200 watt street lighting, was on display.  LED chip performance has increased another 30% since last year and manufacturers have seen the proverbial light.  UL’s engineering teams are now overwhelmed with the volume of pending new applications they need to review.

Now that Digital Lumens (DL) is out of stealth mode it makes sense for us to start covering some of our learnings with LED high wattage applications.

Beginning last year we conducted a series of DL test trials with our customers.  Recently we exhibited at the IARW show as a “coming out” party, showing both the now shipping DL system and a short video from our first large installation at a yet-to-be-announced freezer cold storage facility.

Prior to our DL tests we had learned that operating managers had three general concerns about LED high wattage applications – (1) light level performance, (2) cost and (3) glare.

In 2006 Groom Energy engineers began testing the latest general illumination LED fixtures with our early adopter customers.  Our demonstrations proved that these products were still too expensive, couldn’t produce enough foot-candles and had no track record to support their 100,000 hour operating life claims.  More importantly, none of the them took advantage of what LEDs do best – intelligent control.

Groom Energy hosted a webinar on May 21st entitled “Trends and Best Practices using LED light sources in Commercial, Industrial and Outdoor applications.” This event was driven from the many conversations, questions and engagements we have had with our commercial and industrial customers, like, “are LED’s the answer for my industrial application?” “How soon until LEDs will be competitive with fluorescent light sources?” ” Which applications have been successful and which have not, and why?”….. we attempted to answer a few of these questions using this broad forum and maybe to provide clarity to some of the claims from providers.

Commercial and Industrial LED Webinar to be held May 21st, 2009

Register here for our webinar on LED Lighting presented by Groom Energy and Greentech Media! 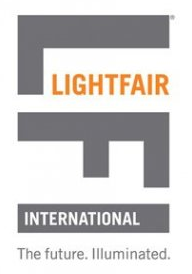